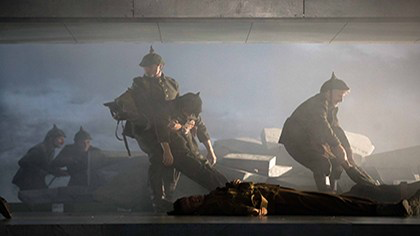 The opera, with music by Kevin Puts and a libretto by Mark Campbell (The Manchurian Candidate, 2016), is based on the 2005 film Joyeux Noël, which was nominated for an Academy Award for Best Foreign Language Film. A stellar cast and creative team join forces in Austin to present this powerful vision of humanity and hope.

Silent Night recounts a miraculous moment of peace during one of the bloodiest wars in human history. The year is 1914 and the Great War has just been declared, dividing nations and sending millions into battle. As Christmas Eve falls on a battlefield near Belgium, soldiers in French, German, and Scottish trenches begin recalling songs of home, stepping into no-man’s-land for a spontaneous truce. Once sworn enemies, they trade their weapons for merriment and camaraderie—resulting in one miraculous night of peace.

Since its world premiere at Minnesota Opera in 2011, Silent Night has been produced at opera companies around the world; Austin Opera’s performances happen in time to celebrate 100 years since the end of World War I.
Approximately 2 hours and 30 minutes, including one 25-minute intermission