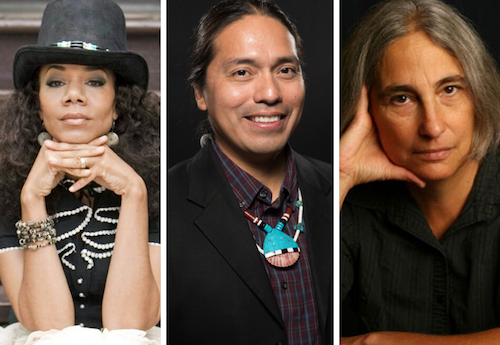 Presented by The University of Texas Humanities Institute

This Fall the UT Humanities Institute is partnering with Texas Performing Arts and Native American and Indigenous Studies to host a Difficult Dialogues public panel featuring Martha Redbone, Angelo Baca and Anne Lewis titled “Indigeneity, the Land, and Storytelling.” The panel will feature storytelling by Martha Redbone and screenings of film clips by Angelo Baca and Anne Lewis.

This event is free and open to the public. RSVPs are appreciated but not required.

About the Guest Speakers:

Martha Redbone is a multi award-winning musician and storyteller celebrated for her roots music embodying the folk, indigenous, and mountain blues sounds of her childhood in the Appalachian hills of Kentucky. Her latest CD, “The Garden of Love- Songs of William Blake”, produced by Nitty Gritty Dirt Band founder/Grammy Winner John McEuen (2012). Alongside her career as a recording artist and songwriter Martha Redbone has maintained a steady involvement with causes she believes in. Ms. Redbone is contracted by The Department of Indian Education- Louisiana, LaFourche where she teaches Southeastern Traditional Singing Workshop for the United Houma Nation’s Bayou Healers Cultural Enrichment Camp program. Martha guest lectures on subjects ranging from Indigenous rights to the role of the arts in politics and Native American Identity at many institutions including New York University, the University of Michigan and the University of Massachusetts at Amherst, to name a few.

Angelo Baca is a Hopi/Diné documentary filmmaker and scholar who works on educational films, fiction, and non-fiction. He is currently a Ph.D. candidate in the Department of Anthropology at New York University and is a graduate of the Native Voices Program at the University of Washington. Baca has done numerous documentaries and collaborative works with other filmmakers. He also has taught Native American Literature and Native American Media/Film courses at Brown University. His research interests vary from indigenous food sovereignty and Native American health and wellness to indigenous film and cinema to native youth development projects, including indigenous international repatriation. Baca was recently chosen by the National Parks Conservation Association’s (NPCA) “Ten under Forty list” of dynamic cultural activists who make up the Next Generation Advisory Council.

Anne Lewis is an Associate Professor of Practice at UT Austin’s Department of Radio-Television-Film and an independent documentary-maker associated with Appalshop Films, a media arts and cultural center located in Whitesburg, Kentucky, in the heart of the Central Appalachian Coalfields. Her work reveals working-class people fighting for social change. Anne was an associate director/assistant camera for HARLAN COUNTY, U.S.A., the Academy Award-winning documentary about the Brookside strike.

Documentaries she produced, directed, and edited include: ANNE BRADEN: SOUTHERN PATRIOT co-directed with Mimi Pickering about the extraordinary life of a civil rights leader; MORRISTOWN: IN THE AIR AND SUN, a working-class critique of globalization, TO SAVE THE LAND AND PEOPLE, a history of a militant grassroots environmental movement; JUSTICE IN THE COALFIELDS about the community impact of the Pittston strike; ON OUR OWN LAND about the citizens’ movement to stop broad form deed strip mining; and CHEMICAL VALLEY co-directed with Mimi Pickering about environmental racism; and most recently, SHELTER, which tells the stories of 5 West Virginia women as they try to find freedom, justice, and safety. Her documentary, FAST FOOD WOMEN, about women struggling to raise families on minimum wage jobs with no benefits, received national airing on P.O.V. and was part of a Learning Channel series of films about women by women.