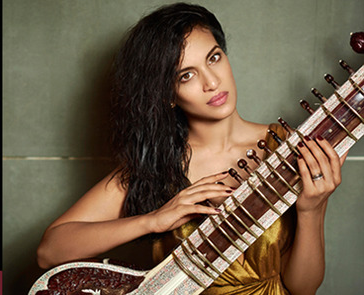 Presented by The Indian Classical Music Circle of Austin (ICMCA)

Sitar player and composer Anoushka Shankar is a singular figure in the Indian classical and progressive world music scenes. Deeply rooted in the Indian Classical music tradition, Anoushka studied exclusively from the age of nine under her father and guru, the late Ravi Shankar, and made her professional debut as a classical sitarist at the age of thirteen. By the age of 20, she had made three classical recordings for EMI/Angel and received her first Grammy® nomination, thereby becoming the first Indian female and youngest-ever nominee in the World Music category. In 2005, Anoushka released her self-produced breakthrough album Rise, which earned her a second Grammy® nomination. Following this nomination, Anoushka became the first Indian artist to perform at the Grammy® Awards.
Accompanied by OJAS ADHIYA on Tabla, PIRASHANNA THEVARAJAH on Mridangam, RAVICHANDRA KULUR on Flute, DANNY KEANE on Cello and Piano, and KENJI OTA on Tanpura

To make special arrangements for your course, contact:
icmca.committee@gmail.com
512-895-9524